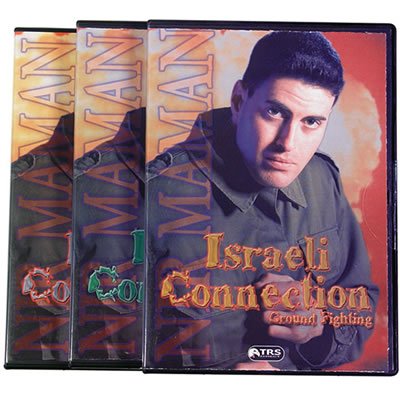 NIR MAMAN (pronounced Near) is a former Israeli special forces commando and top hand-to-hand combat instructor. His long-range reconnaissance unit (the feared Sayeret Golani) roamed deep into enemy territory, fighting, capturing and eliminating terrorists and insurgents. Usually, there were only 4 men in his unit. Alone, without back-up, miles from safety – and with less than one-fourth the training our own Spec Op soldiers receive – these men faced constant, unrelenting and vicious counter-guerilla combat. These men did not have the luxury of long training. Israel has a limited population, and the men who join the Special Forces must get up to speed FASTER than any other soldier in the world. ISRAELI CONNECTION – This is a HUGE 4-tape package — the first 2 life-changing videos are on hand-to-hand fighting (including moves no one has ever seen before outside the Israeli Spec Op world!), the third video is a stunning ground fighting video and the fourth is an incredible knife and gun disarming tape. Total Run Time: 3 Hrs 30 Min100% Brand New
Made In USA